SO, it shouldn’t be a secret by now that I love awards shows.  I know they are just one giant commercial for the respective industry that the awards are for but they set the tone for fashion and trends for the whole year.  I am not a huge music person, I mean I like music, but I never know who actually sings which song.  If I like a song, I like it.  End of discussion, no more questions.

The Grammys are, without a doubt, the awards show that I would most like to see in person.  It is like one big concert, except the audience is made up of a ton of celebrities who are all wearing the most RIDICULOUS outfits they could find,  Case and point, this guy:

We get it dude.  You are an artist.  But did you really have to startle me so bad with that huge turkey on your head? I thought I accidentally changed the channel to a horror movie! Were you even playing that instrument?  Heres the video if you want to replay it.  Sheesh!

But on to the important things.  The fashion.  This awards show was hard for me.  Everyone there was expected to wear something wild so it is really hard to determine best and worst dressed since everyone looked pretty ridiculous. To further complicate things, CBS sent a Wardrobe Advisory Warning email that instructed guests to “Please be sure that buttocks and female breasts are adequately covered. Thong type costumes are problematic.”  It also asked that “no visible “puffy” bare skin” is exposed.   Whatever that means!   So I decided to show you the biggest celebs that were attending and then I’ll tell you if I thought they were a hit or miss.

1.) JLo – one question… WHY!?  Don’t you know that Angelina already tried this look last year?  Dont you know that you look like you are wearing a garbage bag that some how got stuck around your leg?  Also, can we quit it with the tiny sumo wrestler bun? I mean what is that on the top of your head?  NO. NO. NO.  You are really pretty but this is all wrong! 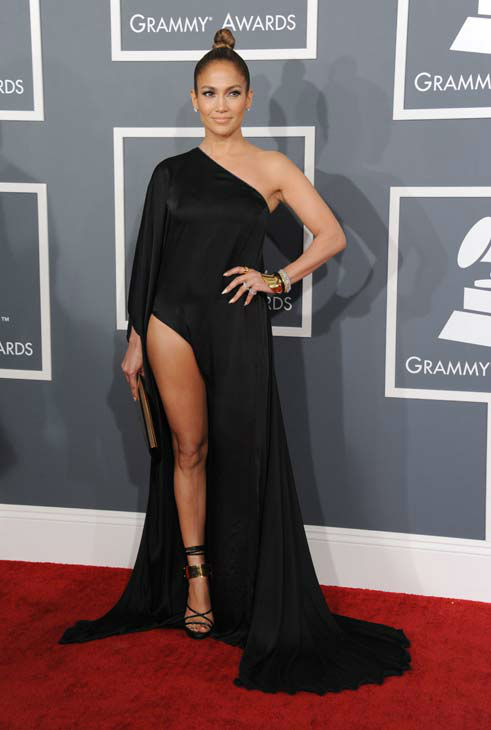 2.) Taylor Swift- Okay, I can handle this one.  It is beautiful but also very safe.  I loved what she had going on at the Golden Globes and at People’s Choice awards.  Those were both sleek, sophisticated, and sexy.  I would have liked to see her push the envelope just a teensy bit more.  Maybe something more like the Alaia that Rihanna was wearing would have been good.

3) Oh Bey! Couldn’t we have just recycled the leather and lace teddy from the Superbowl or something?  She looks like she is going to a luncheon or a business meeting.  It is a chic choice for a movie premiere maybe, but I don’t know if it was right for this occasion, it is almost too casual.

4.) Katy Perry- I think this is very pretty on her.  The color is fun, it fits her well, and I think overall it is a good choice.  I am wondering if the wardrobe advisory is satisfied with this outfit.  She is pretty covered up except her, ahem,  “girlfriends” have made quite the appearance.

5.) Rihanna- She was a stunner tonight.  I loved all of the outfits she was wearing, from this red carpet look to her performance of Stay to the Bob Marley tribute.  She was fun, but rather sophisticated.  The past two years, she was great in the fashion department.  I loved her dress last year too.  A huge departure from the DISASTER she wore in 2011

6.) Carrie Underwood- You know, I was watching the red carpet shows and everyone was talking about how they were hoping that Carrie would wear something a little more fashion forward and a little sexier this year. But I have to say, she always looks dynamite, and she has an immense amount of talent so she can do whatever she wants.  Religion plays a huge role in her life and I can respect someone who stays true to what they are comfortable with and what they believe in. 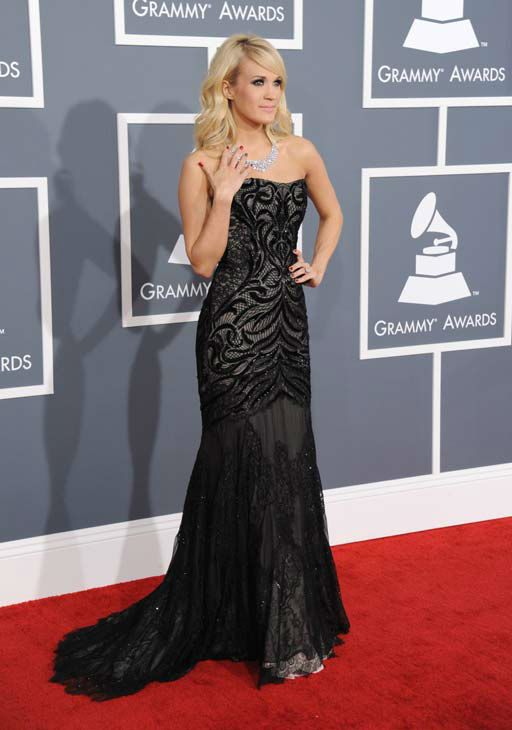 7.) Adele- FINALLY, some color!  I know this is going to be polarizing but the girl is damned if she does and damned if she doesn’t wear black to everything.  I think she looks great, it’s a good silhouette for her, she knows how to dress for her body type.  The neckline may be a little high for me, but I think she looks great nonetheless, especially on stage in this. 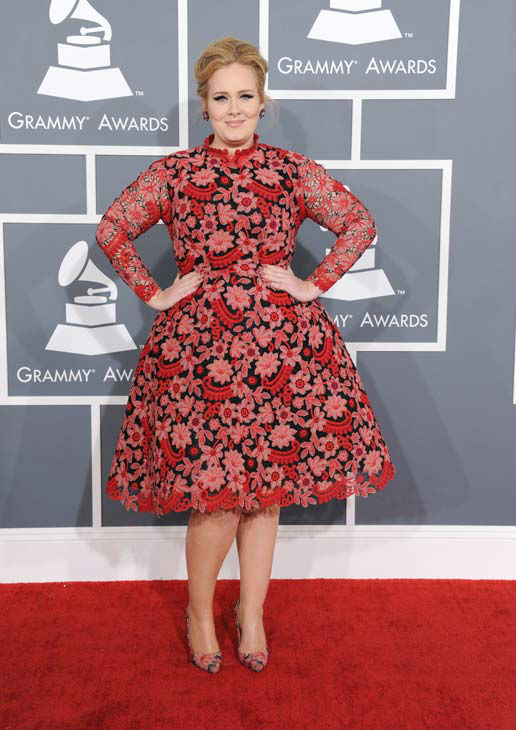 8.) Kathy Griffin- “The Susan Lucci of the Grammys”  The woman has been nominated FIVE times and still hasn’t won, not even this year.  But she wins in my book with this outfit.  I do have to say, the hair is not working for me.  What is with the choppy ombre layers we have going on here? 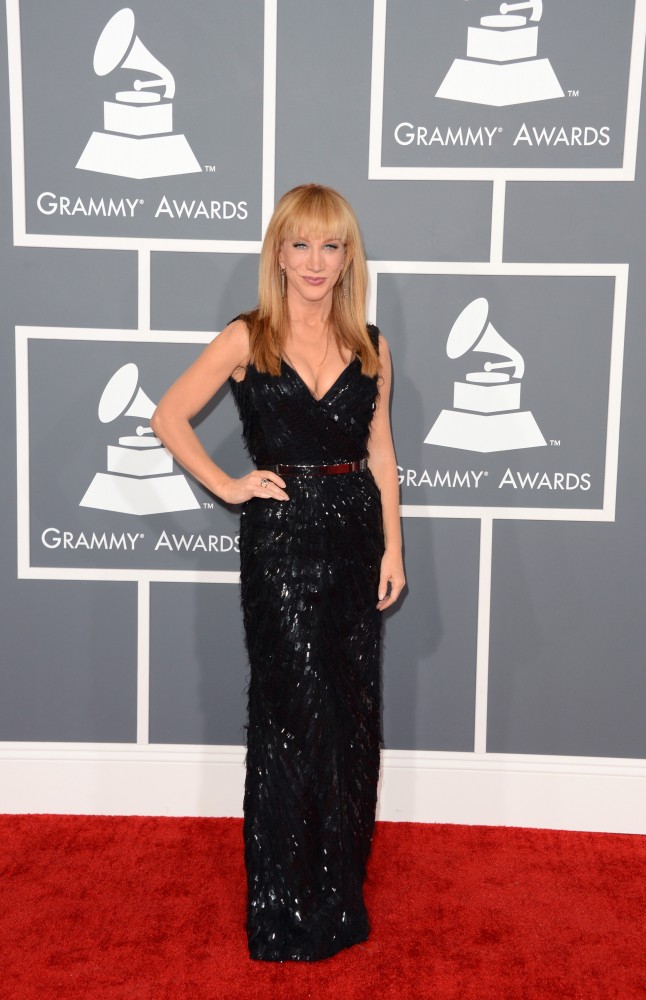 9.) Drake vs. Nas- These two were up against each other for Best Rap album.  Both are looking pretty nice in their colored tuxedos.  I am not an expert in menswear but I can tell that these two are looking sharp.  My only concern is that Drake’s blue tux doesn’t look like it fits him too well… 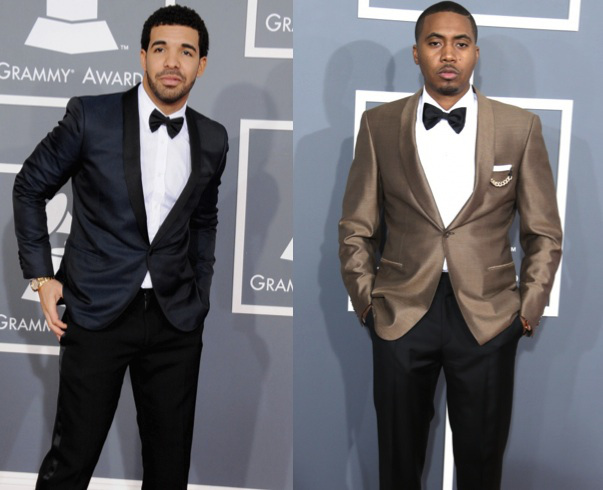 10.) Justin Timberlake- What the hell was he thinking?  He looks like a clown!  I love Tom Ford and I feel like it is blasphemy to say such things about such a prolific designer but really?  The floppy bow tie? The horrible fabric choice? That weird pocket square thing?  Nope, not feeling the outfit.  I do like the hair, and the performance was fabulous, but let’s look in the mirror before we leave home, shall we?

Also, does anyone know where Kim-ye, Nicki Minaj, and Lady Gaga were last night?  I was expecting to have all kinds of material to write about from them alone!